Each player in Brass Empire chooses one of five corporations to represent.  Each corporation is very distinct and gives players access to exclusive cards and a starting strategy to lean on. 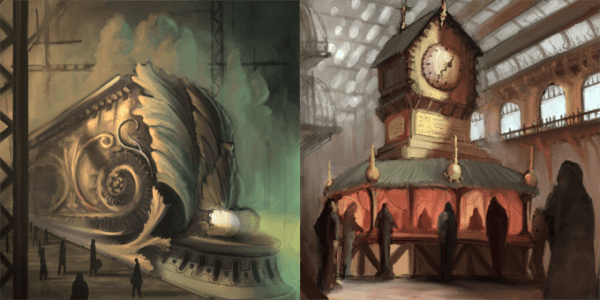 No company is more dependent on Brass than Frontier Rail. Their business is all about transportation and there’s only one thing that fuels their trains. With hard workers like Bennett Ironside, Frontier Rail has been able to expand its rail network across Cobalt and has a clear monopoly when it comes to shipping and public transportation. No one can get something across the planet cheaper than Frontier Rail. The company prides itself on being the first to settle new regions along the frontier before anyone else. In addition to shipping, Frontier Rail and its subsidiaries produce and transport medical supplies, prosthetics, mining machinery, and some consumer electronics.

Today the company is led by Elizebeth Boyd. A tough gal whose father raised her on the frontier while he worked as a Railway Contractor. Her cool demeanor and hard work ethic quickly moved her up the ranks until she was promoted to Chief Executive Officer before her thirtieth birthday. Under her leadership, Frontier Rail has doubled its revenue despite some negative press about thieves roaming the railcars and pilfering passengers. Elizebeth is also credited with expanding Frontier Rail’s banking business by building new bank branches and providing increased protection services to brass

Frontier Rail is one of the easiest corporations to play in my opinion. Their core strategy is all about getting Brass points, depleting the mining pool and ending the game as fast as possible. If you load up on Frontier cards, your buying power is going to be low as the game goes on. If it goes on too long, you will probably lose. 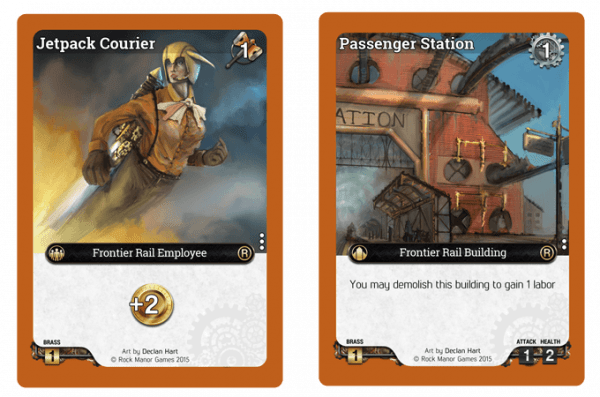 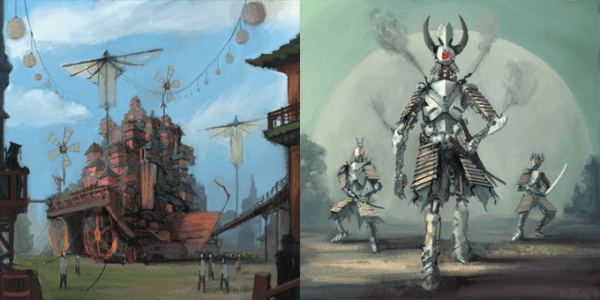 The conservatively run Omni-Edo Corporation is currently run by Chairwoman Himiko Edo. Ms. Edo may have inherited her position, but she is known to run the company with the ruthless efficiency that Omni-Edo has become synonymous with. While Himiko may come off as demure, she has made some of the most cunning financial investments and acquisitions of the past decade. The shadowy Omni-Edo Corporation owns or invests in other corporations, leveraging their wealth and assets to buy and sell smaller companies at an alarming rate.

For the past several decades, Omni-Edo’s obvious specialty has been construction, a legacy of the Edo artisans that crafted building materials and weaponry for the emperors of old. Many of Omni-Edo’s subsidiaries are construction companies and suppliers. By some estimates, up to sixty percent of the parts and materials of every Windcraft Airship and Frontier Rail SteamEngine are supplied by an Omni-Edo-controlled company. Cunning accounting and business practices ensure that even when the client companies fold, Omni-Edo still comes out ahead. Given the company’s tendancy for ruthless layoffs, it should be no surprise the corporation is comfortable playing hardball. While little has been proven, some mysterious deaths and espionage have been blamed on elements within the corporation. Omni-Edo favors efficiency above all else and a brute-force approach to most problems, using its vast resources and to get its way.

Omni-Edo’s core strategy is to make your deck slim and efficient.  Only their cards can dismiss/fire employees and other cards from your deck.  Unlike other factions, purchasing Omni’s reserve cards early (especially the Corp Ninja) is definitely beneficial since it will trim down your deck faster. Otherwise Omni-Edo is pretty diverse and balanced in it’s production and labor and has some powerful units and miners as well. 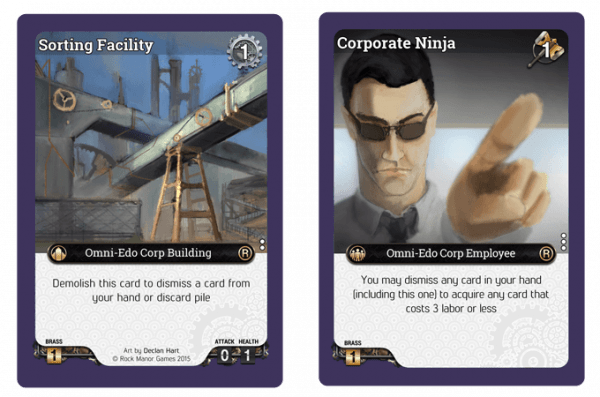 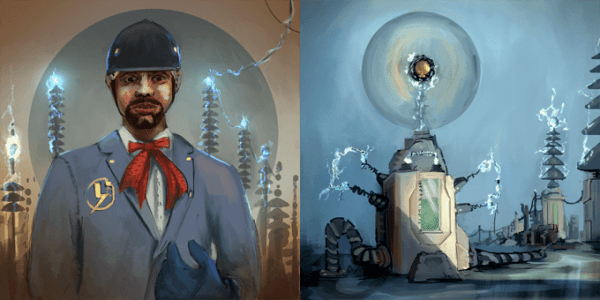 The progressive Harlem Electric Works company was founded by Harlem Redmond to provide an alternative energy source to Brass. Harlem was not born into wealth and luxury. His father worked long hours on the Windcraft Enterprises assembly line until he was killed. The Redmonds were told that he died when some of the airship fuel was accidentally ignited and were paid handsomely to support the story and move on. This tragedy provided Harlem with the financial opportunity to attend college but has also shaped his beliefs and motivations. Harlem believes that society’s complete reliance on the fossil fuel, Brass, will eventually lead to its destruction. He also harbors a deep resentment and distrust for Windcraft Enterprises.

While at University for his electrical engineering degree, Harlem was taught by then graduate student, Quentin Edison. Quentin Edison shared Harlem’s vision for alternative power and together they have discovered several new ways to harness electricity and improve its efficiency and power output. These discoveries coupled with their patents on piezoelectric crystals, batteries, and photovoltaic cells have vaulted this young company’s wealth into the stratosphere. The company is plagued by gossip. Rumors abound that the company sabotages and steals from their competition. Despite these unsubstantiated rumors, Harlem Electric Works continues to be one of the most profitable companies on Cobalt and is aggressively expanding into new regions.

Harlem Electric is by far the most aggro faction out there and their strategy centers around controlling the boar.  Almost all of their cards center around dealing damage, setting traps, sabotaging, stealing cards, and forcing players to discard.  They are about keeping the other players down since they tend to lack the buying power of other factions though Harlem Electric cards are worth a lot of victory points.  Harlem can be tricky to play – be sure to hold off on purchasing your militia cards until you actually have building/units to deal damage to otherwise they just take up spots in your deck. 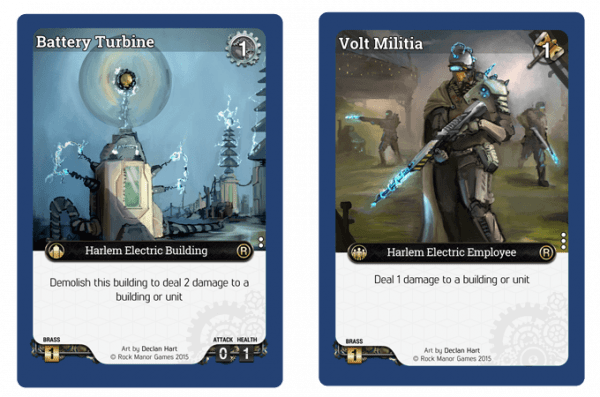 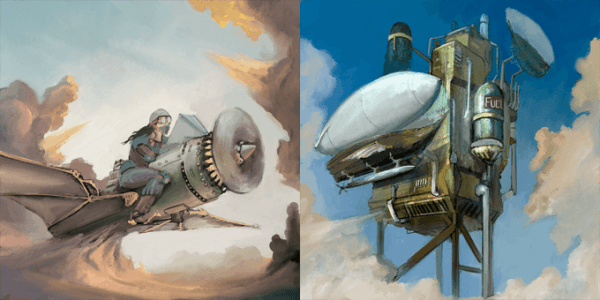 Windcraft Enterprises was originally founded by the royal Tarleton family during the brass revolution. While the company started off catering to the upper class with luxurious sailcars, there quickly grew a need for more efficient manufacturing techniques to bring their products to the masses. The Tarleton’s were the first to introduce methods for large-scale manufacturing of vehicles with moving assembly lines. While their factories are known for their deplorable working conditions, Windcraft Enterprises is also known for their quality craftsmanship and superior design. Orville Threepwood deserves much of the credit for current public sentiment of the Windcraft brand. His zeppelin and airship designs are both elegant and deadly.

The transportation market is controlled by Windcraft Enterprises and their chief competitor, Frontier Rail. Both corporations have become enormously wealthy through their joint monopoly. While Frontier Rail serves the common man, Windcraft holds the patent on airship technology and most of the necessary technology and techniques for developing a proper consumer vehicle. Windcraft’s business has extended well beyond manufacturing flying contraptions and vehicles. Through their aristocratic roots, Windcrafts Enteprises has also been able to secure major government defense contracts and manufacturing deals. Their weapon designs are said to be even more sophisticated than their sleek new SteamCycle.

Windcraft is the only company that actually has a unit in their reserve deck so no other faction can churn out cheap 1/1 units faster.  These pester hounds can give you an early lead but can also really slow you down if other players react quickly and start destroying them.  Ultimately, Windcraft is about infrastructure and controlling the board with your units.  Windcraft players should focus on the design department and the construction resource – building an impressive array of buildings and defending them with a swarm of flying contraptions. 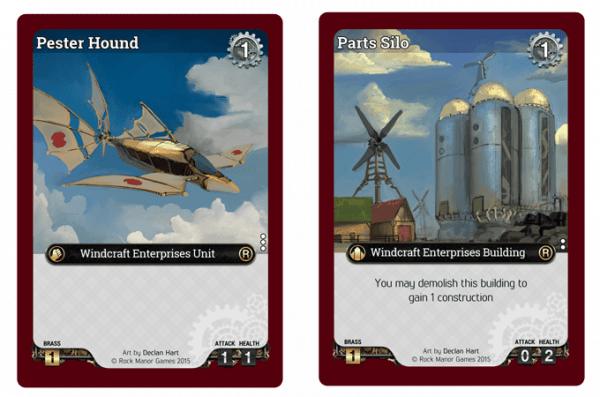 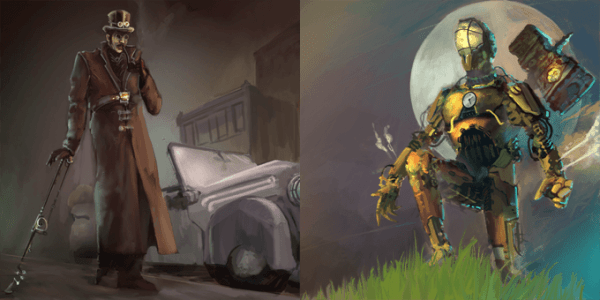 The McGlynn clan has long served the aristocracy and royalty of Cobalt and continue to serve as policemen today. When Brass was discovered, the family was recognized for its long service and given an earldom. It used this surge in wealth to unionize the workforce and start a small watch company. That watch company has grown into one of the largest research and staffing firms in the world. McGlynn Clockwerks may be known for its ornate watches and timepieces, but its strength is its people and insight.

McGlynn continues to win lucrative government contracts. They have practically privatized the police force and profited off of the power that comes with enforcing the law. Inspector Harlowe may appear to be a good chap, but it’s rumored that his thirst for knowledge has led to the development of a brutal automated weapon. People whisper that employees from McGlynn’s staffing companies remain loyal and continue to feed the mysterious McGlynn Tower research facility with information even as another company pays their salary. It is said that all knowledge flows through Earl Hildebrand at the Tower. We all know that knowledge is power.

McGlynn leans heavily on the labor resource and most of their cards center around drawing cards and milling through your deck.  This is great to get to cards faster, but there’s also a lot of risk/reward as you discard cards to potentially draw the exact card you need to be able to purchase the card you are pursuing.  This flexibility makes them very popular with more experienced players, but can also lead to some big mistakes by newbies.  Combining McGlynn with Omni-Edo (fires cards from your deck) can be a very powerful combination but you have to remember to adapt and invest in units and building too and not get too caught up in building your labor force. 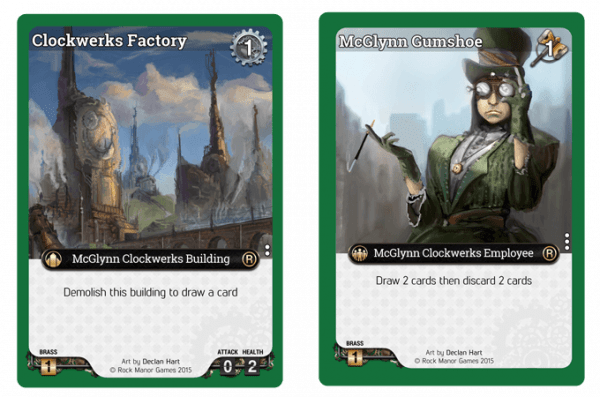 Join Us on Discord

Open discussions and development around all our games; behind-the-scenes look; online playtesting and more.